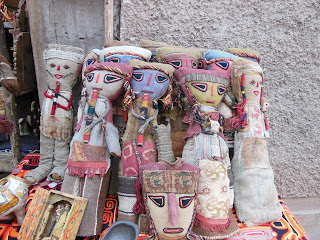 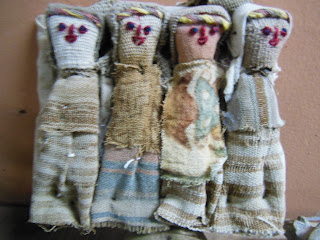 These Chancay dolls (named after the Chancay culture ca. AD 1000 - 1476) are near facsimiles of a doll making tradition that was in practice along the arid central coast of Peru 1000 years ago. These modern dolls are an example of indigenous Peruvian artisans redeveloping an ancient industry of their ancestors to provide a new source of income.

The original Chancay dolls have mostly been found in the tombs of people from the extinct culture. They may have served in memorial celebrations or as 'companions' for the dead (similar to the Egyptian Ushabti figurines). On the other hand, it has been suggested that they were toys or even puppets. It is interesting that some dolls have been found to contain small items such as spindles and yarns along with the usual stuffing of more rigid plant fibers.
Labels: BLUE TAPE-travel craft, craft features, Peru
Newer Post Older Post Home