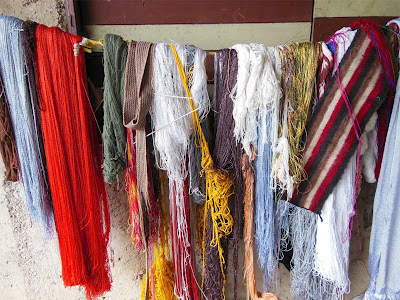 This ancient style of weaving uses a resist dyeing process similar to tie-dye where the warp and/or the weft yarns are dyed before the fabric is woven on the loom. The result of this process is a motif which is “blurred” in appearance. This ‘cloudy’ look comes from the slight bleeding of the dyes into the resist areas.

I've borrowed some excerpts from a report by Gonzalo Ortiz for IPS as it mirrors my experience.

Outside the modest two-story adobe house, a flag of Ecuador flutters alongside a large sign that reads “Ikat: weaving demonstrations and sales.” Hanks of yarn and colourful fabrics hang from the handrail running around the edge of the courtyard and balcony, and weaving looms can be seen inside.
This is the home of a craftsman who is helping to keep alive the art of “ikat”, a complex traditional style of weaving involving tie-dyeing of yarn to create intricate designs.

“There are just a few of us left who still do this, maybe 15,” Jiménez commented. “And to think that 40 years ago this craft was widespread in Gualaceo!”

Located along the road running from Cuenca — Ecuador’s third-largest city — to Gualaceo and Chordeleg, towns in the south of the country that are well-known for their weaving, embroidery and pottery, Jiménez’s house serves as his family’s home, workshop and store.Jiménez and Ulloa, their four children and four employees are dedicated to “one of the most complicated approaches to dyeing found anywhere in the world,” in the words of the Smithsonian Centre for Education and Museum Studies. In ikat, a Malay-Indonesian term, some sections of the yarn are knotted and covered prior to dyeing. This tie-dye technique, one of the oldest forms of textile design, is common to many cultures around the world.

“The paint brushes are in my head, because the design that the fabric will have comes from the way I have dyed the yarn, and how I have distributed the yarn on the loom,” said Jiménez, who added that the specific technique used by him and “the few of my fellow craftspeople who are left is unique in South America. Sitting on the floor, with his traditional backstrap loom wrapped around his waist, he tightens the warp, just as weavers in Latin America did for thousands of years before the arrival of the Spaniards.

The production of ikat fabrics is indeed in decline, especially due to the plunge in demand for the “macana”, a traditional cotton shawl with a hand knotted fringe. The colourful macana was typically worn by “cholas”, women of mestizo (mixed-race, basically Spanish-Amerindian) descent. In the rigidly stratified society of the time, the Spaniards wanted cholas to be easily distinguished from both indigenous and white women, in their way of dress. Although typical cholas Cuencanas can still be seen in Cuenca, there is a generational divide. “In this area, there are hardly any young people who wear the traditional dress,” Jiménez said.

“Luckily, ikat textiles have survived thanks to the far-sighted work that CIDAP (Inter-American Centre for Crafts and Popular Arts) began in the early 1980s, anticipating the slow disappearance of the garment,”. CIDAP has also helped solve problems with middlemen and supplies, in the provision of raw yarn and assistance in the sale and marketing of the finished product through fairs, exhibitions and warehouses in Cuenca and Gualaceo. In addition, CIDAP has helped make haute couture designs and hold fashion shows in Ecuador, the United States and several European countries, “to generate a different kind of demand.” “Jiménez and dozens of craftsmen and women from Gualaceo have received scholarships from CIDAP to learn to use their marvellous art to weave a range of different articles.”
Labels: BLUE TAPE-travel craft, craft features, Ecuador
Newer Post Older Post Home