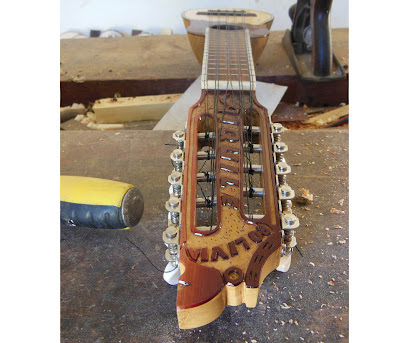 A 1998 earthquake hit Cochabamba’s Southern cone, badly affecting Aiquile, the after-effects of which can still be seen to this day in the cracks which run through some of the town’s streets. Most of its population is Quechua , and its residents are reputed to be the best charango makers in the country. They even have a giant Charango statue in the center of town.

It is made by hand in many little workshops in town from a large block of wood most often instead of the traditional dried armadillo shell. A single piece for back and bowl is roughly carved out and hand sanded smooth. The result needs to be stretched and weighted to find the perfect balance before glueing the face on to little tabs along the rim. The string is used to keep the balance during the drying. Next the fine inlays and decorative edging is carved and applied before the findings are added.

When the Spanish conquistadores came to South America, they brought with them a traditional spanish guitar. There are many stories of how the charango came to be made with its distinctive diminutive soundbox traditionally made of armadillo. One story says that the Spaniards prohibited natives from practicing their ancestral music, and that the charango was an attempt to make a lute that could be easily hidden under their ponchos. 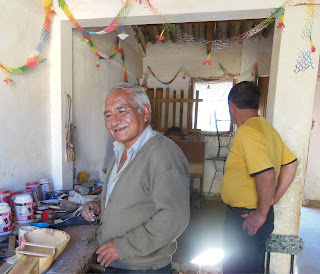