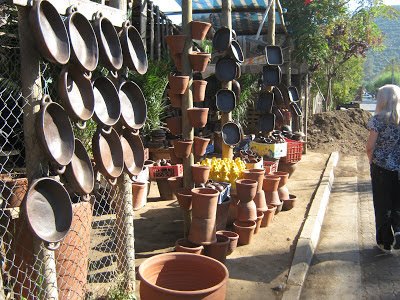 If you have ever eaten at any restaurant in Chile, one of the pots or plates was likely made in Pomaire. It's unconceivable to imagine eating Pastel de Choclo (Corn Cake) in anything other than an earthenware bowl from Pomaire. In 1583, due to the growth of its population, the founding tribe moved to Pomaire's current position which is surrounded by hills that were a source for the clay they needed for their pottery.

From the middle of the 19th century, community leaders began to motivate the local inhabitants to produce more pottery so that it could be sold later at market in Valparaíso. From 1853, a caravan of carts filled with pottery would regularly travel to Valparaiso just before Christmas to sell their wares and from there, continue on to the Virgen de Lo Vásquez Sanctuary for the local religious celebrations at that time. 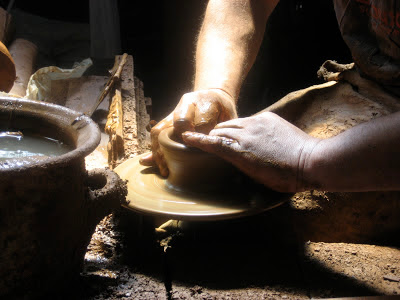 During the rest of the year, the local potters would often visit neighbouring landowners and farm workers to exchange pottery for food.

The artisans have preserved the tradition of working with clay using basically the same techniques that have been passed down from generation to generation
Labels: BLUE TAPE-travel craft, Chile, craft features
Newer Post Older Post Home