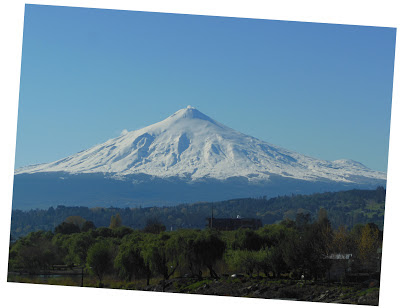 Though it is called Villarrica today, its original name was Rucapillán or "House of the Pillan," Pillan being a powerful and sometimes disaster causing spirit, according to local mythology. The Villarrica Volcano has indeed caused disaster with the earliest recorded eruption in 1558 and 65 eruptions since. Lava flows up to 18 kilometers long have come spilling out of the glacier covered volcano, and one of the more recent in 1971 killed over 200 people from toxic gas inhalation and mud slides.

The Villarrica Volcano is a beautiful sight, covered in snow year round, and experiencing only small eruptions. Among the unique sights at the Villarrica volcano are its volcanic caves, the only caves in an active volcano, visitable on earth. One can travel hundreds of meters into the side of the active volcano and see the hardened remains of was once an active lava flow oozing out of the mountainous side.
Labels: BLUE TAPE-travel craft, Chile
Newer Post Older Post Home