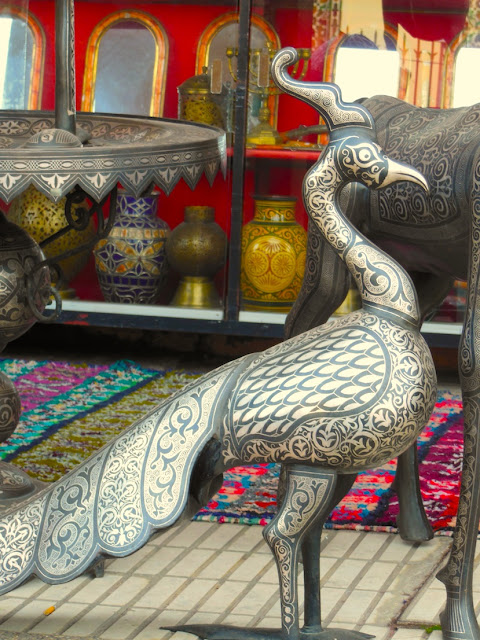 One of the great attractions in Meknes are the craftsmen of "Damasquinerie".

It is difficult to untangle this type of metalwork's origins but Meknes is now the only place to find it. It would seem that it was originally exported by Jewish craftsmen from Syria into Toledo in Spain where they established a colony in 500 BC (see other posts for my visit to Toledo). A little over a thousand years later jews were exiled from Spain bringing some of the craftsmen to settle in Meknes.
Metal forms are made out of an alloy of different irons. After lots of cutting and bashing they finally obtain the desired forms. The shapes are then cut with a special knife to form a grid on the surface of the objects. 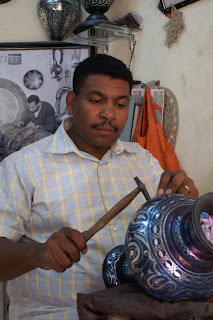 The next step is to hammer silver thread into the metal. Gold was used originally but the local Berbers preferred Silver and now gold linning is only found in Toledo.
The Malem (master crafstman) can then start the decorative part of the work. With a tiny little hammer he will slowly and patiently decorate the entire piece. They never use a pattern and work only from inspiration. No two pieces are alike.
Once this is done the object is sent to the furnace which will melt the silver thread and darken the metal. The final step is polishing the Damasquinerie.
Labels: BLUE TAPE-travel craft, craft features, Morocco
Newer Post Older Post Home